Take me to your Kitchen...

Or perhaps I should have called this "Cooking is a contact sport".

Now, having said that, I hope I haven't set back female progress about 60 years.  The truth is I just love creating meals for family and friends.  I don't claim to be some fantastic home chef by any means, but every bite is made with love and I'm always glad to hear the silence as the plates are rapidly emptied.

Like a lot of people who enjoy cooking, I started as a child.  While my mother could manage some things, she really did torture food.  Of course I only truly realized that after I'd been on my own for a while.  But either way, she started me on my adventure.  And the passion for cooking and food has only grown over the years. My ideal kitchen would have two full ovens, six cooking burners, loads of counter space to work on, a butcher block, you name it.  My favourite thing to do when I travel is to try the local food.  I don't mean the stuff they serve in restaurants that cater to tourists.  I want to eat the stuff that locals eat on a daily basis.

If anyone asked me what my favourite thing is to make, I really wouldn't know how to answer.  I love making desserts, breakfasts, dinners...I can't even pick a favourite theme, let alone a favourite meal.

For breakfast, eggs are king.  One of my favourite ways to make an omelet is to take three eggs, crack them into three separate bowls and beat them.  If you want anything in the omelet, make sure it's sliced very very thin.  My preference is shredded cheese, paper thin slices of orange peppers or tomatoes, or even slivers of ham and onion.  So get the prep work done first because the cooking happens fast.  Start your toast before the first egg hits the pan.  Heat the pan and when it's ready, drop the first beaten egg into it.  Quickly tilt the pan around so that the egg spreads out over the bottom.  It will cook fairly quickly, so be ready to sprinkle in your cheese (or whatever), but not too thickly.  Then, using a couple of spatulas, carefully roll the egg up jelly-roll style and leave it in the pan off to one side.  Now drop in the second egg and spread it around, making sure it connects to the first egg.  Now toss in your cheese on the second egg.  Starting with the first egg that's already sitting there rolled up, roll it back so the second egg is now wrapped around the first one.  Leave it off to the side and repeat with the third egg and cheese.  Slide your "egg roll" onto a plate with your toast and eat.  We call these our "nest eggs" and they are actually more filling than if you simply made a 3-egg omelet the usual way.

This time of year a nice hearty soup is the best option for lunch.  Some of our favourites are French Canadian yellow split pea, leek and potato, onion, and a very hearty vegetable.  For dinner, we often enjoy chicken and dumplings, beef stew, shepherd's pie, and of course various pastas with either my homemade tomato or homemade pesto sauce.   Desserts, needless to say, are fun for an entirely different reason.

I'll have to write more another day, because right now I've got a loaf of banana bread to take out of the oven and have to start the prep work on the slow cooker stuffing I'm making for the Thanksgiving celebration of a club we belong to.  Keep on Cooking! 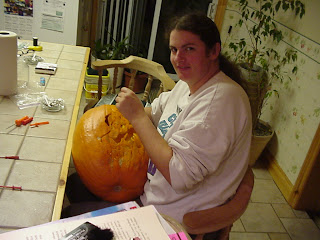 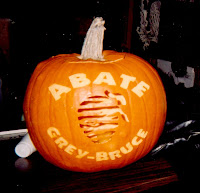 If I had to pick a favourite time of year, I’m not sure if Halloween or Christmas would win.  However, since Halloween is rapidly advancing, I’ll go with it for now. 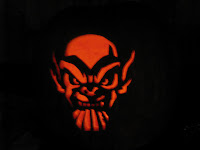 I’ve always enjoyed the fun of dressing up, becoming someone or something else for a little while.  The costume, make-up, wig, and whatever accoutrements are needed to create the look I’m trying to achieve.  Now that my son is eight, it’s even more fun because my excitement has transferred to him and he’s keen to figure out just the right thing. 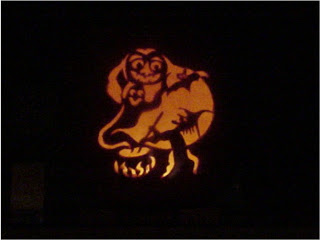 Another thing he’s getting more and more interested in is the one thing that I love most about Halloween ... the pumpkin.  I spend a good amount of time and gas driving around this farming area looking for just the right pumpkin or two.  I really have the best time carving intricate patterns into my pumpkins. 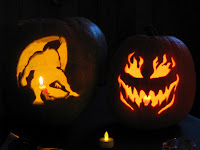 To do this, you have to first find your pattern.  You need to have this first in order to know how big of a pumpkin you’ll need.  There’s nothing worse than getting a pumpkin that hasn’t got enough real estate for the size of pattern you want to do.  Then you need to actually go get your pumpkin.  If you’re going for a smaller one for a first effort, be sure you don’t get pie pumpkins.  These little guys are practically solid inside and you’ll spend a week just trying to get the inside cleaned out.  Also, another good tip for pumpkin-purchasing...try to get one that’s fairly flat on the side you want to carve.  If your pumpkin is too ridged, it will be hard to carve, but will also distort the pattern. 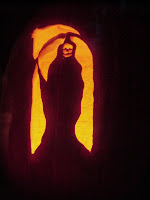 For a beginner, the best bet is to go to any Walmart-type store and buy one of those pumpkin carving kits that comes with instructions and some beginner patterns.  These kits have all the essentials.  First make sure your pumpkin sits up by itself.  Carve out a lid and remove the innards.  Use the scraper from the kit to scrape off as much of the internal flesh of the pumpkin as you can.  On the side you want to carve into, try to keep it even thinner (say half an inch or so).  I know this measurement is tough to gauge and the best I can say is that it should have a little give when pushed from the outside, but not too much.  Don’t forget to save those seeds for roasting! 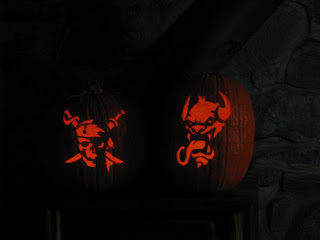 Tape your pattern to the pumpkin.  If you need to, either cut slits or fold the paper (like pleats) so it’s as flat as possible against the pumpkin.  The next tool ro use from your little collection is a small pointed thing.  This is the poker and it is used to trace the lines of the pattern, poking holes through the outer skin of the pumpkin every few millimetres.  These little holes will provide a guideline for the cutting.  After you’ve poked holes in all the lines, remove what’s left of the pattern and set it aside for reference.  Now pick up the little thing with the saw blade on it.  Insert it into one of your holes and then simply “connect the dots”.
Follow along the pattern lines and keep sawing. 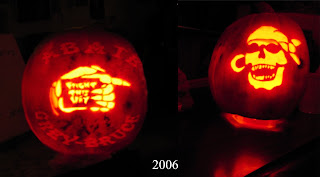 You will want to go quickly, but don’t.  If you do, you might end up cutting somewhere that you shouldn’t.  Just keep referring to your pattern as you go.  Start in the middle and work your way out, doing small intricate things as close to the beginning as possible.  These will be difficult to do later otherwise.  If you do accidentally cut something you shouldn’t have, a small “repair” can be made using a needle or a toothpick to reattach the cut part.  I prefer toothpicks because they are made of wood and therefore biodegradable, but also because no-one is likely to be hurt by it.  If you need to, you can trim the inside flesh a little closer to the outer skin after you’ve finished carving, but be very careful as this would be the likeliest moment when you might cut or break something you don’t mean to. 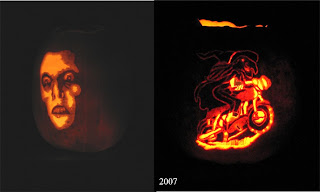 Put a candle inside, the lid back on, and turn off the lights.

While several of these are quite do-able for a beginner, the ones here at the right are more advanced.  These were among my first attempts at a carving technique that skims or shaves off the outer layer of the pumpkin's skin.  The flesh inside has to be thick enough to sustain the pumpkin, but thin enough to allow light to shine through.  It creates that "shadow" effect that's more visible on the face in the left of the picture.
Posted by JP Norton at 12:11 pm No comments: