Motorcycle Madness and the V-Star Afghan


A few months back I wrote about the Yamaha V-Star afghan I was making.  Friends of mine ride a V-Star and wanted a personalized afghan.  After doing everything I could think of to get out of doing it without coming right out and turning them down, I created the graph.  It looked pretty good, if I do say so myself.

I started the actual crochet work in June and picked away at it through an incredibly hot and humid summer.

While working on the blanket took up my free time, I was also busy at work and being a member of a bike club, I spent time at meetings and riding in general.

For the last few years there have been some ongoing problems with my bike.  Of course part of the problem is that it’s a 41 year old bike, but only part of the problem.  About three years ago I had the misfortune to run out of gas on one of our group rides.  Another rider happened to have a gallon in his saddlebag and helpfully dumped it into my tank.  We rode to the nearest gas station and I filled my bike, offering to replenish the biker’s spare tank as well.  I can pinpoint this moment as the start of my problems.  As I was filling my tank at the gas station, this biker was telling me he’d been carrying that spare gas for months now and he was glad to finally use it.

EEK!!!  Months?  After sitting for months the gas would have gone punky.  Sure enough it caused problems with my bike.  For a variety of reasons I didn’t ride much that year and not at all the next season.  This season I convinced my husband to put the carbs from his bike onto mine since he wasn’t riding anyway.  It was like having a new bike.  I rode as much as I could.

One day I was riding home from work, and as I turned onto the road that would take me to my road, I released the clutch and a bolt or something popped off the clutch and my cable came free.  Uh oh.  Since the engine was still engaged, I kept going, making sure not to go too fast.  As I approached my road, I decided to make the turn and then let the bike stall.  Our area is very hilly and I did not know how I would have managed on our dirt road if I were going downhill and a deer jumped out or something.  I called my husband and he came to my rescue.  He’s been riding for 50 years so it was a fairly simple thing for us to bump start the bike and get him rolling.  I followed in his car.  He speed shifted the bike and got it home and into our driveway.  He fixed me up with a new clutch cable and I was roadworthy once again.

Last month I was heading out on the bike to attend a biker club meeting.  My husband and our young son left a few minutes before me heading out to the dump.  I hopped on the bike and started to the highway, but never got there.  About five kilometres from home I heard a noise and the bike started sputtering.  I figured I was getting low on gas and quickly turned on the reserve.  It didn’t help.  The bike kept sputtering and finally just stalled.  I coasted to the side of the road and hopped off the bike.  I looked down and gas was spewing from one of the carbs.  Yikes!

I quickly turned off the gas and stepped away from the bike to assess the situation.  Knowing that my family were still on their way to the dump, I pulled out my cell phone and left a message at home.  Despite this being modern times and that we live rurally, I am the only one with a cell phone between the two of us.  So I estimated I’d have about a half hour wait.  I called my club and told them I wouldn’t be there.  I didn’t want to leave my antique bike on the side of the road and walk home.  I also didn’t want to walk 5 kilometres in biking boots.

Fortunately my phone had a full charge so I opened my reading app and started reading a book while I waited.  And waited.  And waited.  After the first hour and a half, I tried calling again.  Then after two hours I called again.  Finally, after almost three hours, I got my son on the phone.  He told me they’d just gotten in.  He went outside to tell my husband I was on the phone.  I briefly told him what the problem was and a few minutes later he showed up with a new plug and some gas for me.  It turns out that he and my son were on their way back from the dump when the truck ran out of gas!  When I went with him to retrieve it, I measured how far they’d walked.  Our 11-year-old son walked 5 kilometres before just pooping out.  My husband left him with our dog sitting on a big rock near the road.  He jogged the rest of the way home – a further two kilometres – to get the car and pick them up.  They had just all gotten home when I called.  I figured it was meant to be that I not be on the road that day.

With fall now upon us, I was able to devote more time to working on the afghan.  Cooler evenings meant that I was not roasting under the blanket as it lay on my lap while I worked.  I finished it a few days before Halloween and finally got to hand it over to my friends on Halloween when they came to the club party.  They were thrilled.  She cried.  It’s all good. 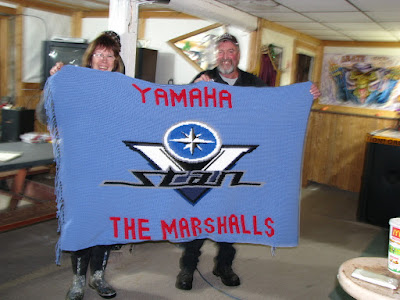