OMFG, It Is Way Past Time!

Women everywhere watched in horror last week as the United States Supreme Court ruled to reverse the Roe v Wade decision made in the early 70s.  That decision gave women in the US the right to access abortions without persecution.

Read that again – the RIGHT to access abortions because prior to that they needed permission to do so and in order to have a medically safe abortion you had to go through hoops such as proving the mother's life was in imminent danger.  When the Orange Idiot sat on the throne from 2016 to 2020, he had the opportunity to load the Supreme Court with right wing republican judges.  Despite the fact that they are supposed to be impartial (justice being blind after all), they have allowed religion to become the law of the land and have now, in a single moment, taken away the right of women in the US to have autonomy over their own bodies.

Yes, you read that one correctly too.  A country that prides itself as being the land of the free has shackled its women once again.  What next?  Will women and minorities lose their rights to vote?  Will women no longer be able to have bank accounts or credit cards in their own name?  No more being allowed to drive or own a vehicle?  For that matter will they even be allowed to work outside the home once they get married?  That’s what this could devolve to.  Let’s not even talk about same-sex marriages, gay rights, transgender, etc.  The implications of what could happen to them are just as horrifying.

Several states have already declared it illegal to perform abortions and I’ve read that some are even taking steps to criminalize the act of leaving the state to have an abortion in another state or country.  I can’t see how that would be logistically possible unless they plan to put up border patrols at all roads that leave the state.

I can see it now:

Person:           *passes over passport of other travel documentation

The absolute lunacy of these scenarios means they are possibly quite likely to take place.  Remember, truth is much stranger than fiction.

In light of what’s happening south of our border, it is high time that Canada put body autonomy into our Charter of Rights and Freedoms.  Why, in this day and age, should a bunch of men be allowed to decide what rights a woman has, especially when it comes to her own body?  If the government forces women to have babies they don’t want or can’t have for a variety of reasons, will the government be there to ensure the babies don’t grow up in poverty or worse?  In the US, apparently a 12-year-old who has been molested by a male family member is too young to consent to sex, but not too young to have a baby.  That child is neither mature enough in mind nor body to have a baby, but the US government would make her do it anyway.

Since we’re looking to change the Canadian Charter of Rights and Freedoms, let’s also change the Canadian Human Rights Act because banning a woman from seeking an abortion should be against her rights.  It’s time for Canada to stand up and support its women and it’s time for the Canadian government to recognize, officially, women as persons with all the rights that male persons currently enjoy without question and without having to fight for them.  I’m not a man-hater or women’s libber, but I am absolutely disgusted that in the year 2022 women are still oppressed in our supposedly civilized western society.   It's time to #makechangehappen.

To our female friends south of the border, my heart is crying for you right now.  Instead of safe, responsible care for women who have made what is likely a very difficult decision, there will be the return of the coat hangar for those without the means or resources to seek help in another state or country.  Try and be safe, my sisters. 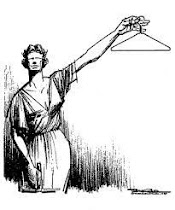